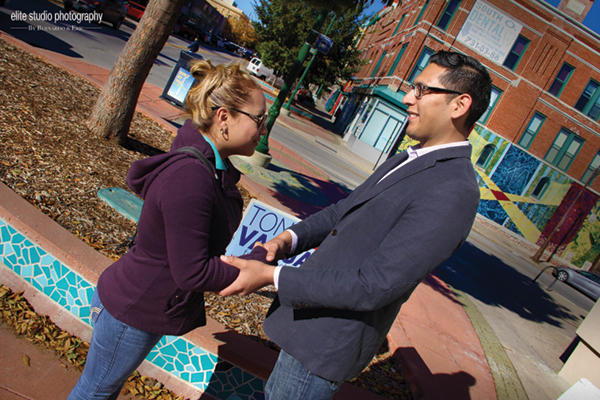 Nebraska Legislative District 7 candidate Tony Vargas canvasses homes wearing shoes with soles worn to the nub. Even though his feet get wet on rainy days, he intentionally sticks with that same beat-up footwear.

“It is a reminder that if I’m not knocking on doors, I’m not doing enough,” said Vargas, 32. “There is no substitute for hard work. People in our community are working their tails off trying to provide for themselves and their families and so I should be doing the same thing, which means meeting people where they’re at. There’s no substitute for that type of engagement.”

This bilingual son of Peruvian immigrants is nearing the end of his Omaha Public Schools Board of Education term representing Subdistrict 9,which encompasses the same heavily Latino South Omaha area as Legislature District 7.

The former New York City public school teacher knows what it took for his family to make it in America. His father is a machinist shop steward and leader in his local union. His mother worked on assembly lines.

“It wasn’t until later in life my family had some success. I’m fully aware of all the struggles and sacrifices my parents made and I carry that with me in everything I do. My parents emphasized it was great our getting closer to the middle class but it didn’t mean anything unless we were helping others do the same.”

A life of public service has followed for Vargas.

“My parents instilled you can’t sit idly by and watch. I worked with Habitat for Humanity all throughout high school doing builds in my community and across the nation. In college I did service work. I became a public school teacher in a lower income community because I wanted to be where it reminded me of places I grew up and where I felt my skills would be most impactful.”

He was a Teach for America adviser and Leadership for Educational Equity’s director of policy and advocacy.

His wife, attorney Lauren Micek Vargas, is a South Omaha native who was a pubic school special education teacher, She worked for Legal Aid Nebraska before joining the Douglas County Public Defender Office. The couple moved here in 2012 so Lauren could finish law school at Creighton University. They have a home in Little Italy and attend St. Frances Cabrini Church. In 2013 Vargas felt called to apply for the vacant OPS Subdistrict 9 board seat. He was appointed over three others to complete the position’s remaining term.

Vargas is now vying for incumbent Nicole Fox’s District 7 state senate seat that she won by appointment when Jeremy Nordquist’s vacated the office. Vargas decisively won the spring primary – taking 10 of 12 precincts – over Fox and runner up John Synowiecki, who is a past District 7 representative. Vargas and Synowiecki both registered Democrats, are facing off in the nonpartisan Nov. 8 general election.

If elected Vargas would be the first Latino state senator from Omaha and only the second ever in the Unicameral. The potential history is not lost on Vargas.

“To me it does mean something and since my district is one of the state’s largest Latino populations, the topic does come up. But what really comes up is how I’m working to earn people’s votes and respect. My wife and I have been knocking on doors for a year. People are excited we are working to understand what their lives look and feel like. Still, some people do remark, ‘And you’ll be the first Latino elected from Omaha to this office.’ and that makes it a little more exciting for them.

“As much as I want to be a voice for the Latino community, I’m serving all people-all populations in my district.”

Vargas said his melting pot experience dovetails with the “very diverse district” he seeks to serve.

“I have many different identities that matter to me: my Latino identity; my immigrant identity; my working-class labor family identity; my public service-public school teaching identity. All those things keep me grounded. One thing my background really taught me is that in our current system there are haves and have nots and it tends to be much harsher on communities in poverty and of color. If we don’t find pathways to support them, we’re not improving our entire city.

“The same real problems I saw affecting people in New York I see in my community now. There are pockets seeing some growth, strength and development. But I see the majority of people still struggling in similar ways to how my family did.”

He said people are voicing “concerns around barriers to accessing quality health care, housing and not making high enough wages or getting enough hours from employers. I am hearing about underemployment and unemployment and the impact it has on kids and families.” Education inequities at inner city schools is another pressing issue. He’s proud of the track record he and his school board mates achieved.

“I think what we’ve done on the school board is really a step in the right direction in terms of improving infrastructure and the safety of our schools, closing the achievement gap in our neighborhoods, improving community engagement, holding the district accountable to what we do well and what we don’t do well and passing a strategic plan.”

As a founding board member of New Leaders Council Omaha, he trains millennials to be Next Gen leaders like himself.