At first glance, Alley might seem like a sweet pet resting close to its masters. However, she is actually a member of the Fire Investigation Unit (FIU) of the Omaha Fire Department (OFD).

Alley is a Labrador Retriever trained as an Accelerant Detection Canine, thanks to the State Farm Arson Dog Program. Her mission is to sniff out the presence of flammable liquids such as gasoline and kerosene which might have been used to start a fire.

Alley was presented at the OFD headquarters on August 31. During the event, it was explained how an arson dog is very useful because it saves the agency a lot of time and money since it helps to decrease the pieces of evidence that must be sent to labs for to be analyzed.

Battalion Chief Timothy McCaw of the Public Information Office of the OFD lead the ceremony headed by Omaha Mayor Jean Stothert, who got to meet Alley before the event, saying she could verify she was “friendly, docile and properly trained.”

Stothert mentioned it was OFD Captain Melanie Bates who “recognized the need for having someone like Alley,” as well as the opportunity to collaborate on this with State Farm and the non-profit First Responders Foundation.

Mayor Stothert emphasized that this is the first time the OFD has had a dog at its service and that Alley “is the only one of its kind in the state.” There are currently 360 dogs all over the country that have been trained like Alley, all as part of a program that State Farm started back in 1993 to help authorities find which fires were intentionally started. Insurance agent Matt Dougherty corroborated this, highlighting how said initiative “goes to show the efforts from the company to contribute to keeping our communities safe.”

Dan Olson, Interim Chief of the OFD, highlighted the importance of Alley’s tasks which will “lead to more arrests” because in 2015 the agency “took care of 327 investigations regarding fires,” out of which some  turned out to be for fraud.

Olson introduced David Sobotka, who is in charge of Alley’s tasks. They both completed four weeks of training at Maine Specialty Dogs in Gray, Maine.

During over 200 hours of class, Sobotka really got to know Alley who, unlike a member of the police K-9 unit, “won’t go chasing after people since her priority will be to identify smells,” taking advantage of her nature. A dog has over 220 million smell receptors, while humans only have 5 million.

Sobotka mentioned how Alley “works for her food” and with the help of Kenna, her older daughter, as well as of Captain David Mann of the OFD, several objects were placed on the floor. These included towels soaked with specific substances so that his loyal companion could show her skills.

Every time Alley correctly completed Sobotka’s orders, Alley was rewarded with food and, of course, with a nice pat and some kind words from her keeper.

Alley is two years old and has a unique personality but, as Sobotka mentioned, just like every other domesticated animal, “she needs proper care and attention, so she’ll come home with me every night and her training will continue during each weekend.”

This was taken well by Sobotka’s wife and two kids, who happily joined Alley during her first appearance before the media: “They understand she has a job and that she’s my responsibility.” This commitment is based on training every day, even if Alley is not assigned to revise a specific scenario.”

Without a doubt, Alley will turn some heads, but her presence as part of the OFD would not have been possible without the $25,000 from the State Farm Arson Dog Program which covered her purchase and training as well as travel expenses. First Responders Foundation, under the lead of Ray Somberg, will continue to secure enough funds for her wellbeing, veterinary care and certifications.

At the end of the presentation, Alley gladly enjoyed a piece of cake courtesy of Three Dogs Bakery, and she posed like a rock star with executives from other local agencies such as Mark Langan, Vice President of Field Operations for the Nebraska Humane Society.[:] 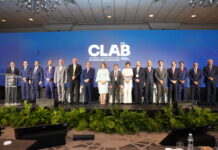